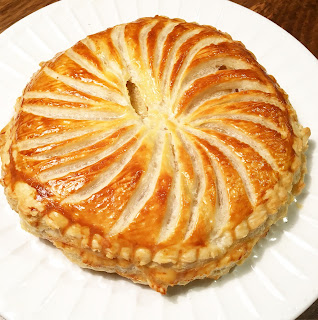 Catching up on old episodes of the Great British Baking Show and gave this recipe a try 🙌It's one of the tastiest desserts we've baked in ages — perfect for small holiday parties and family dinners!

1. Line a baking sheet with baking parchment. Roll out half the pastry on a lightly floured worktop until slightly thinner than a pound coin. Cut out a round about 9 inches in diameter. Set on the lined baking sheet and cover with clingfilm. Roll out the rest of the pastry in the same way and cut a second round. Set this on top of the clingfilm, then cover the whole lot with clingfilm. Chill while making the filling.
2. Beat the butter until creamy with a wooden spoon or electric mixer. Beat in the sugar, then beat thoroughly until the mixture looks pale and fluffy. Beat the egg with the yolk until just combined, then gradually add to the butter mixture a tablespoon at a time, beating well after each addition. When the mixture is very light in color and texture gently, stir in the ground almonds, flaked almonds and almond extract. Cover the bowl and chill for 15 to 20 minutes.
3. When ready to assemble uncover the pastry, and remove the top round and clingfilm. Spoon the filling onto the pastry round on the baking sheet, mounding it slightly in the middle, and leaving a 2cm border uncovered all around the edge.
4. Brush the pastry border with beaten egg, then gently lay the second pastry round over the filling. Press the edges firmly together to seal. Holding a small knife blade at right angles to the side of the pastry, ‘knock up’ the edge all around by making small indentations in the pastry. Then scallop the edge by pulling the indentations in at 2cm intervals with the back of the knife. Brush the top of the pastry very lightly with beaten egg to glaze and chill for 20 minutes. Meanwhile, preheat the oven to 400F.
5. Brush the top a second time with the beaten egg glaze, then score a pattern with the tip of a sharp knife. Make a couple of small steam holes in the center. Bake for 25 to 30 minutes or until the pastry is a golden brown and crisp. Leave to cool slightly before serving.